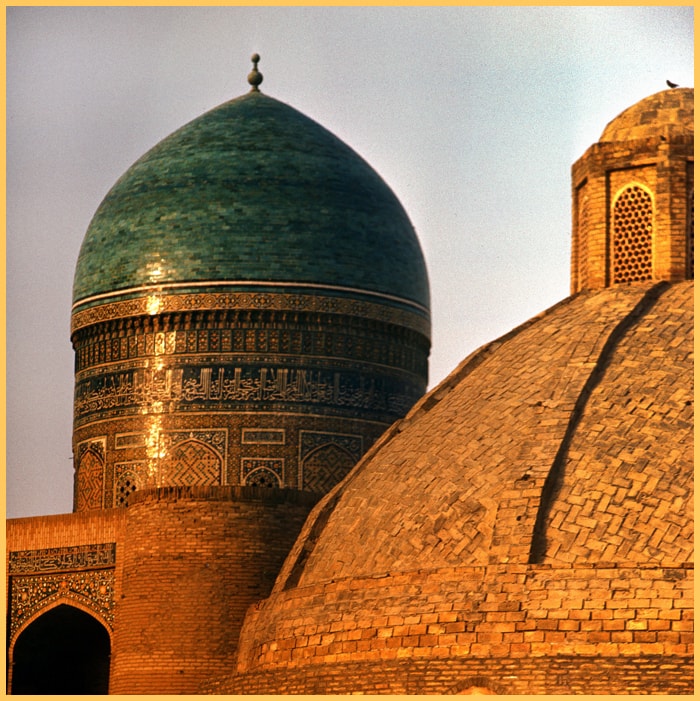 
Day 1: Tashkent
Upon arrival in Tashkent International airport, the driver will meet you and drive to Tashkent city. Travelers will have a city tour and visit the Independence square dedicated to the victory over fascism in World War II. Afterwards we will walk to the local Broadway located between Independence square and Amir Timur square. The tour will be continued to the well-known Tashkent metro, which is measured to be one of the most exclusive underpasses in the world opened in 1977. Then visit old part of the city as Chorsu Bazaar, Kukaldash Madrasah and Hast Imam complex which has several madrasahs, mosques and mausoleum. See Othman Quran which is the world's oldest Quran of the 8th century. Night is in a hotel.

Day 2: Tashkent - Bukhara (flight or train)
In the morning is a flight to Bukhara. On arrival you will visit citadel in Bukhara of the 4th century and called - Citadel Ark. Then we will visit Samanids mausoleum of the 9th - 10th centuries. Travelers will drive to Chashma Ayub (Job's well) and Bolo Hauz mosque, where you can find forty columns dedicated Bukhara governor Abu Fayud Khan. Then we will visit the most famous madrasahs of Bukhara - Nodir Divan Begi. It is the part of Lyabi House Ensemble. Visit Poi Kalon complex. It consists of three structures which were built in the 12th - 16th centuries as: Kalon minaret, Kalon mosque and Mir Arab Madrasah. Rest is in a hotel.

Day 3: Bukhara - Shahrisabs - Samarkand
Travelers will have an opportunity to visit the birthplace of Amir Timur. It is the city of Shahrisabs. See Ak Saray Palace, built by Amir Timur. This place is very celebrated mid travellers due to its amusing history. There is a note on the main portal of the Palace: "If you want to know about our power, look at our buildings". The next destination is the Jahongir mausoleum dedicated to the eldest son of Amir Timur, who lost his life in war when he was twenty years old. When his son passed away, the ruler grieved for 30 years. Later you can visit Shahrisabs, the Dorus Siadat and Dorus Tillavat commemorative complexes where all descendants and families of Amir Timur were suppressed. We will travel to Samarkand. Overnight is in a hotel.

Day 4: Samarkand
In the morning is a city tour in Samarkand. Samarkand is an attractive city located in the valley of the river Zerafshan and measured to be the second largest city of Uzbekistan as the city of Babylon or Rome. We will visit wonderful highlights such as Registan square, Shakhi Zindeh, Mausoleum Guri Emir and Bibi Khanum Mosque. Registan Square is a complex of three unique Madrasahs of the 15th -17th centuries. Shakhi Zindeh contains the collection of mausoleums of the 11th -15th centuries. It is a part of UNESCO World Heritage Site. Bibi Khanum Mosque is dedicated to the beloved Tamerlane's wife, after his deal in India. Transfer to a hotel for sleep.

Day 5: Samarkand - Tashkent
Travelers will have a city tour in Samarkand city. Visit Ulughbek observatory found in the 15th century by Ulughbek. It is one of the most well-known Samarkand front-runners and academics. Ulughbek worked there he produced the "Zidji Guragoni" catalog in 1437, in which entailed the message of 1018 celestial bodies. Regrettably, his son killed him. Then visit the local Broadway. Travelers will have an opportunity to buy souvenir shops, teahouses, sweets, workshops and many other interesting things. We will visit the National bazaar Siab. You will see Uzbek traditional handmade products and local sweets. There is also a carpet factory made by over 400 women! Afterwards is Tashkent in the evening by train. Night is in a hotel.