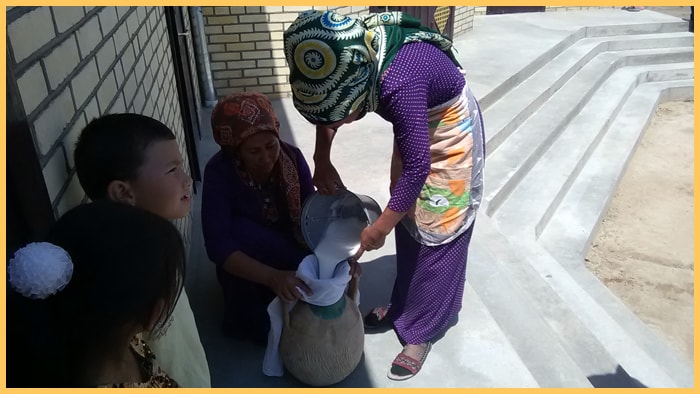 Day 1: Ashgabat
We are happy to see you in Turkmenistan. On arrival at the airport, the guide will meet you and drive to a hotel. After some time, we will drive to the Horse farm for discovering the pride of the Turkmen people - Akhal Teke horses. You will admire Akhal Teke horse show program and can see the stands of horses. In the end of day, we will return to Ashgabat for evening city tour. Night is in a hotel.

Day 2: Ashgabat
In the morning we will visit "Old Nisa". It is the Sanctuary of Parhian Kings (UNESCO site). The tour will be continued with "Gypjak" Mosque and Mausoleum of the late President of Turkmenistan. Then visit the State Museum of History. It has ancient artifacts originated at the diggings of the settlements Nisa, Merv and Gonurdepe, assortment of vintage Turkmen carpets, infrequent examples of national clothing, jewelries, and antique weapons. See 9 halls show collectibles of Athens, Eros, silver gilded griffin, horn-shaped ivory vessels-rhytons of the Parthian era, gold jewelries, medallions-stamps from Margiana and Buddhist artifacts. There are also a lot of petrified piece of wood of the Paleozoic period, aged 270,000,000, dinosaurs' footprints, an 820-kg meteorite fallen in Kunya Urgench in 1998 and so on. Overnight is in a hotel

Day 3: Ashgabat - Merv - Mary
Early in the morning we will travel to the East of Turkmenistan, to Mary region. On the way you will visit an Old Merv (Historical Park under UNESCO protection) - Merv was situated at the road adventure of the Great Silk Road and rapidly became one of biggest cities of the ancient world. Today you will have a guided tour and visit Gyz Gala, Erk Gala, Soltan Gala, Soltan Sanjar Mausoleum, Ibn Zeid Mausoleum. Then drive back to city Mary. Overnight is in a hotel.

Day 4: Mary - Talkhatan Baba - Yekedeshik Caves - Mary
Today we will drive to Talkahatan Baba Mosque. It was constructed in 1095, the mosque structures some attractive Seljuk ornamented brickwork. We will continue our trip to Yekedeshik Caves. See the Tagtabazar which is the Ekedeshik cave settlement in the sandstone hills north of the town. 'Ekedeshik' revenues 'single entrance'. The place is captivating, with more than 40 rooms, on two levels. There are several smaller cave developments nearby, counting one known as Bashdeshik ('Five Entrances'), but these places, many of which have not been methodically sightseen, are of more specialist interest. We will return to Mary city. Night is in a hotel.

Day 5: Mary - Margiana (Margush) - Mary
Today we will drive to Margush to visit the 5th center of civilization. It was an important center for human settlement long before Achaemenian times. An amazing Bronze Age civilization survived here, identified variously as Margush, meaning 'lowland', or by the Greek name of Margiana. It has been progressively exposed since the early 1970s by Professor Viktor Sarianidi, who heads the Margiana Archaeological Expedition. The Bronze Age sites are to be found at or outside the northern edge of the present-day oasis, in land, which is nowadays, desert. Climatic change and open-minded desertification caused the abandonment of the area, with the result that the ruins of the Bronze Age settlements are beneath the desert soils. The Margiana sites seem to have had close connection with those at Bactria, in present-day northern Afghanistan. Sarianidi says that the Bactria Margiana complex was a main center of ancient civilization, and has gambled that Margiana may even have been a birthplace of Zoroastrianism. Drive to a hotel for sleep.

Day 6: Mary - Ashgabat
In the morning we will drive to Ashgabat. On the way stop at Annau, the remains of the 15th century Seyit Jamal ad Din Mosque, Abiward or Abi ward, was an ancient Sassanid city in modern-day Turkmenistan. Archaeological digs at the ancient city of Abiward have been made in the last century to about 8 km west of the Kahka station in an area of 12,000 m2. The central tell is 60 feet high and 700 feet round. Afterwards we will visit Russian Bazaar. Rest is in a hotel.

Day 7: Flight
Thank you for a tour!

Note: Each Traveler should have 2 photos (5×6) to be presented at the points of entry.