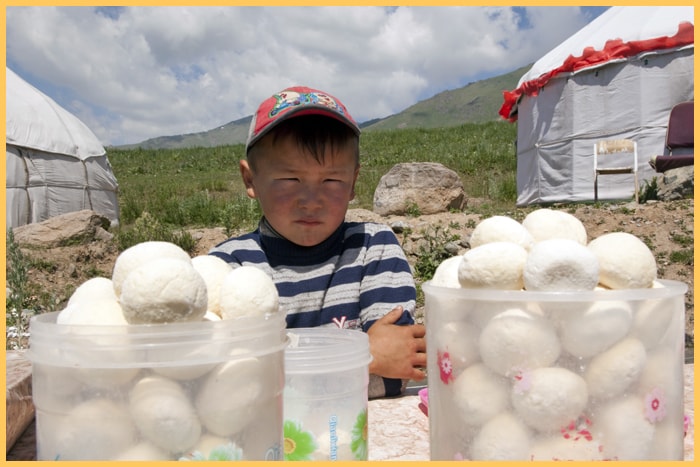 
Day 1: Bishkek - Burana - Issyk Kul northern shore
On arrival to Manas International Airport we will drive to Bishkek. It will take 30-minute from the airport. In the morning we will have a city tour and visit Pobeda Square (Victory Square), Duboviy Park (Oak Park), Central Ala Too Square, Old Square, National Philharmonic and so on. Then we will travel to Issyk Kul Lake, enclosed by the celestial mountains. It's the second largest mountainous lake in the world with altitude 1608 m. above sea level and called "the pearl of Central Asia. On the way we will visit Burana Tower of the 11th century minaret and an open air museum of Balbals so called stone warriors. Rest is in a hotel.

Day 2: Issyk Kul - Grigorievskoye - Semenovskoye - Karakol
In the morning we will travel to the attractive and incredible gorges of the lake called Semenovskoye and Grigorievskoye. You are going to see the highly and great mountains covered with snow at the tops and slopes grown by blue and green pine trees. In the bottom of the gorge you are going to see attractive lakes. Then we will travel to the northern shore of the lake to Karakol town. On arrival you will visit Dungan mosque built in a Chinese style without metal tack as well as an old wooden Orthodox Church. Night is in a guesthouse.

Day 3: Karakol - Jeti Oguz - Issyk Kul southern shore - Bishkek
Jeti Oguz gorge is eminent for red rocks form that are called seven bulls or Jeti Oguz. By the way you can see there the Broken Heart Mountain. We can go on a top of a mountain it will take 20 minutes and there you will be able to relish a panorama view of the gorge. Afterwards we will travel to Bokonbaeva village to get acquainted with a local eagle-hunter. Eagle hunts hares and foxes. In the end of day, we will return to the capital city Bishkek. Transfer to a hotel for sleep.

Day 4: Bishkek - Osh - Guliston - Khudjand
In the morning is transfer to Manas International airport for a flight to Osh city. In the Osh we will take you to Tajik border. You will pass over mountains and high passes where you can admire Batken region and appreciate famous for its apricot trees andflower called Aigul. Tajik guide will meet you at the other side and take you to Khujand city. On the way to the lakes there is Anzob pass with altitude 3 372 m that has magnificent panorama views. The second largest city in Tajikistan is Khujand that is located on the Syr Darya River at the mouth of the Fergana Valley. Its population is 149,000. Khujand is the capital of the northernmost province of Tajikistan, called Sughd. Travelers will visit Cultural Palace of Khujant in the afternoon where chosen Tajikistan's first president. Then visit Central Mosque. Overnight is in a hotel.

Day 5: Khudjand - Iskanderkul Lake
This tour will start by travelling to Iskanderkul lake. It is located at the altitude 2 255 m. a. s. l. This lake is situated in the famous Fann Mountains. Travelers will have opportunity to walk along it beaches and enjoy such nature. See waterfall and hike 30 min. Tajikistan is the country that has second place among the CIS countries for volume of water resources. Tajikistan is the country in Central Asian with more than 1 000 rivers, 2 000 lakes and 8000 glaciers. Night will be in a guesthouse.

Day 6: Iskanderkul Lake - 7 lakes - Penjakent
Today we will travel to see the famous Fan Mountains. On the way you will enjoy Seven Lakes or Marquzor Lakes. We will have a short hiking tour. You will see a gorge where 7 lakes are situated on different altitudes and colors. Afterwards we will travel to Penjakent. This city is located in Khujand area of Tajikistan in an astonishing and wonderful Zeravshan river valley. It is possible that the five villages began its history of the great city which was created in the 5th -8th centuries AD. Penjikent of that time was one of the most significant cultural and crafts centers of Sogd. It is called "Central Asian Pompeii". It was a city with a ruler's palace, two temples, markets, rich dwelling houses ornamented with frequent paintings, wooden and clay statues of ancient gods. The remains of this ancient city were found only in the last century. Today the tourists can see the remnants of dwelling houses and office buildings, the citadel with the palace, the house of craftsmen, and fire worshipers church. Night is in a local guesthouse.

Day 7: Penjakent - Jartepo - Samarkand
In the morning we will drive to the border at 10 a.m. Then you will go to Samarkand where you can have a city tour. Samarkand is in the valley of the river Zerafshan. It is the second largest city of Uzbekistan is Sanarkand. This city is the same age as the city of Babylon or Rome. We will visit Registan square, Shakhi Zindeh, Mausoleum Guri Emir and Bibi Khanum Mosque. Registan Square, a complex of three captivating Madrasahs of 15-17th centuries. Admire beauty of Shakhi Zindeh of large assembly of mausoleums of 11th-15 centuries are part of a UNESCO World Heritage Site. Bibi Khanum Mosque is dedicated to Tamerlane's wife, after his campaign in India. Rest is in a hotel.

Day 8: Samarkand city - Gijduvan - Bukhara
Today we will travel to Bukhara. On the way we will stop at Gijduvan village to visit private workshop. Gijduvan ceramics school has its deep roots that are why skills have been passed via generations. Today there live 6th generation of Narzullayevs family who are overvalued Gijduvan school ceramics all over the world. Gijduvan School of ceramics is famous for its geometric pattern. Green and blue colors lead in the product design. On arrival to Bukhara. Night is in a hotel.

Day 9: Bukhara
Today is a city tour. We will visit most ancient citadel in Bukhara of the 4th century called Citadel Ark. Then you will see Samanids mausoleum of the 9th -10th century. The tour will be continued to Chashma Ayub, meaning Job's well and Bolo Hauz mosque where you can admire forty columns dedicated to Bukhara governor Abu Fayud Khan. Afterwards we will walk via the shopping domes and visit one of the most well-known madrasahs of Bukhara called Nodir Divan Begi which is also a part of Lyabi House Ensemble, famous central sightseeing of Bukhara. The tour will end with visiting Poi Kalon complex, the exclusive sample of architectural art of Bukhara. It has three structures built in the 12th-16th centuries: Kalon minaret, Kalon mosque and Mir Arab Madrasah. Night is in a hotel.

Day 10: Bukhara - Khiva
Today we will travel to Khiva. On the way you will learn that Bukhara has a nickname a "town museum" which has the more than 140 architectural monuments of the Middle Ages. The city has narrow streets, green parks and fabulous gardens, historical and architectural monuments belong to dissimilar eras. When you go to Bukhara from Khiva will go over the well-known Kizilkum desert. On the way you will admire river as Amu Darya which is the deepest river in Central Asia, formed as a result of the confluence of the Panj and Vakhsh rivers in Tajikistan and flows into the Aral Sea. On arrival to Khiva, rest.

Day 11: Khiva - Urgench - Tashkent
In the morning we will explore Ichan Qala, which rounded with strong walls. See old sound buildings, palaces, mosques, Madrasahs, Mausoleums, Minarets, Caravan Sarais and Bathhouses. In Ichan Qala you can see 400 traditional dwelling houses and about 60 architectural monuments. In general, there was a year of 1969when Ichan Qala became a historical and architectural conservation area. Kunya Ark fortress is chief and the utmost attraction here. This fortress was built in 17th century. Kunya Ark fortress originated in the 17th century, by Muhammad Arang Khan. Find sights as Kalta Minor minaret and Tash Khouvli palace, and superb example of Khorezm architectural craftsmanship of 1830s. In the evening driver will take to Tashkent by flight. Overnight is in a hotel.

Service does not include:
- Visa
- Full board
- Travel insurance
- English speaking guide
- Entrances to all museums in Uz
- Flight tickets Urgench-Tashkent